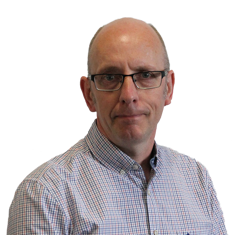 Will has been working in forensic genetics since 1994. He joined UCLan in 2002 and has been involved in establishing and teaching on the Forensic Science and DNA Profiling MSc as well as teaching on the undergraduate courses. He has also been actively researching various areas of forensic genetics such as population genetics, ancient DNA, optimizing collection, storage and extraction of DNA, and methodology related to the identification of human remains. Will is a member of the International Committee of the Red Cross’ (ICRC’s) Forensic Advisory Board and has worked for the ICRC in various contexts, including Iraq, Iran, Lebanon, Nepal, Sri Lanka, Kenya, Indonesia, Philippines, the Balkans, Ukraine, Egypt, El Salvador, Brazil and Argentina. He is also a technical assessor for the United kingdom Accreditation Service, and has been involved in assessing laboratories in the UK and Middle East to the ISO17025 standard for over 10 years.

Will helped to set up and run the specialist MSc in DNA Profiling that has been offered since 2006, he was the course leader for several years before helping to establish and act as course leader for the MSc in Forensic Science. In addition to his teaching he is an active researcher and has supervised over 20 doctoral students.

Before Will joined UCLan he helped to establish the DNA section at the Human Identification at the University of Glasgow and has continued to develop his speciality in this field while at UCLan. He has been involved in conducting casework in international contexts ranging from the Balkans, South Asia and Latin America. Since joining UCLan the active casework has evolved into an advisory role with international and national organisations. In addition to research publications Will has co-authored the textbook ‘An Introduction to Forensic Genetics’ that is recommended reading on several undergraduate and post-graduate courses. He has also published chapters in collections, such as Encyclopedia of Forensic Sciences (2013), Encyclopedia of Global Archaeology (2014), and Encyclopedia of Life Sciences 3 (2013) and in 2016 edited ‘Forensic DNA Typing Protocols’.

Will’s research has focussed on two broad areas within forensic genetics: maximising the recovery of DNA from forensic samples through improved collection, storage and extraction techniques and the application of different forensic markers to forensic genetics including population genetics. The research has focussed on kinship testing but is also relevant in many cases to crime scene work.