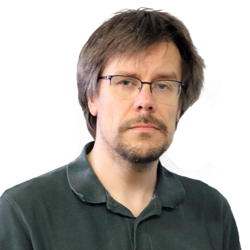 Timo has been a post-doctoral research associate at the Jeremiah Horrocks Institute (JHI) in UCLan since 2010, and is a member of the JHI's solar physics research group. Previously, he worked as a University Lecturer in Turku, Finland, and he has worked as a post-doctoral researcher in Finland and Germany. He works on the modelling of energetic particle transport in the heliosphere, has experience in energetic particle observations, and is involved in space-borne missions.

Timo’s current role is research-based and includes teaching tasks. He has published widely in both modelling and observational research of Solar Energetic Particles, and has published over 60 peer-reviewed articles in internationally established scientific journals and given over 10 invited and over 50 contributed conference presentations. He has also supervised BSc and MPhys student projects, as well as taught BSc students in Mathematics and Astronomy courses.

Timo has a long experience on academic work and heliophysics research. He joined the principal investigator team of the ERNE particle detector, onboard SOHO (Solar and Heliospheric Observatory) spacecraft, before the launch of the spacecraft, as an undergraduate in 1995 at University of Turku, Finland, and also was a member of the ground support team of the antimatter detector project AMS, lead by CERN, in 1998. He did his M.Sc. and Ph.D. degrees in Turku on theoretical aspects of solar energetic particle acceleration and propagation. Subsequently he held post-doctoral positions in Turku and Bochum, Germany, before starting as junior, later senior lecturer (both fixed term) in Turku (2005-2010). After this, he joined UCLan in 2010. Timo has taught undergraduate and post-graduate students in Finland and at UCLan, in Physics, Astrophysics, Astronomy and Mathematics. He has supervised several Ph.D. and M.Sc. theses in Finland, and several undergraduate students at UCLan. At UCLan he is a member of the Mathematics, Astrophysics and Astronomy Distance Learning course teams, and has taught in the Mathematics programme since 2011. He has written Mathematics teaching material and is currently working on astrophysics and distance learning material. He is also investigating online tools for distance learning. During his career, Timo has contributed to scientific literature as author, reviewer and editor. He was a scientific editor of peer-reviewed journal ASTRA (Astrophysics and Space Sciences Transactions) in 2005-2013, and reviews regularly articles submitted to peer-reviewed journals. He has also reviewed funding proposals for NASA and NSF(USA) as grant panellist and individual proposal reviewer. Timo has given several public outreach talks both in Finland and UK, contributed to outreach texts in newspapers and scientific and outreach websites, and participated UCLan public outreach events.

Timo’s research concentrates on heliophysics, in particular solar energetic particles (SEPs) accelerated at the Sun during solar eruptions. These energetic, ionising electrons and ions constitute a serious hazard to our endeavours in space, both to astronauts and satellites, as well as at Earth, when they penetrate the atmosphere and increase radiation dose of high-latitude flight crews. In addition, the damage to satellites due to SEPs can affect telecommunication and logistics at all walks of life. The SEPs thus represent an important part of the Space Weather phenomena, which is included as one of the highest priority natural hazards in the UK National Risk Register. Timo started his career in the PI team of the SEP detector ERNE, onboard SOHO spacecraft, and his first work on research revolved on data and instrument observation analysis and calibration, as well as scientific analysis of the ERNE observations. For his M.Sc. and Ph.D. degree work, he concentrated on the theoretical aspects of SEPS: how they are accelerated in solar eruptions, and how they propagate from the Sun to the Earth. These problems have been at the heart of his research ever since, first in Finland and in Germany, then at UCLan. At UCLan, Timo has worked in several STFC-funded projects, led by Prof. Silvia Dalla. Timo’s most recent work has concentrated on the spread of SEPs in the heliosphere before being observed by spaceborne instruments in near-Earth space. His discovery that the often-used diffusion-based models for the SEP propagation are invalid early during an SEP event and that the SEPs can quickly access a wide range of heliospheric locations along meandering field lines was recently highlighted in a NASA press release. Timo has led and participated in several projects over the years. In Finland, Timo obtained a 3-year Academy of Finland project grant within as the co-PI (Principal investigator) of a Helsinki/Turku consortium “Energetic Particles and Turbulence in Coronal and Heliospheric Plasmas”. He also led several Finnish-German collaboration projects as the Finnish PI. At UCLan, Timo is the UCLan PI of the Rutherford Appleton Laboratories-led ESA-funded investigation of using potential observations at Lagrange point L5 to improve space weather forecasting. He is also a member of the Science Overview Committee for Lagrange mission, a UK-led mission for a new spacecraft that aims to improve space weather forecasting using an observatory at L5 point. In addition, he was recently granted a 2-year large computing project at the STFC’s DiRAC supercomputer system, and he has been a member of several research teams funded by the International Space Science Institute (ISSI) at Bern, Switzerland.