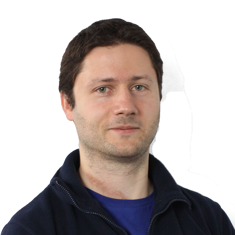 Serban Lepadatu is a Lecturer in Physics in the Jeremiah Horrocks Institute for Mathematics, Physics and Astronomy. He is research active within the area of Nanophysics and Magnetic Materials, specializing in thin film magnetism, multiferroic materials and micromagnetics simulations.

Serban is the author of micromagnetics software Boris Computational Spintronics, a modular multi-physics simulation tool specifically developed to handle large problems and allow for easy upgrade and implementation of new interactions within the micromagnetics model. This software is open source with repository found at Gitthub. In addition to leading the Computational Spintronics Group, Serban has also set-up the MOKE laboratory, used for undergraduate, as well as postgraduate research projects. Serban has taught across all years in the Jeremiah Horrocks Institute, and is currently module leader for modules including the 2nd year Computational and Experimental Physics, 4th year Magnetism module, and Advanced Laboratories.

Serban completed a PhD in Condensed Matter Physics at the University of York in 2007, thesis title "Domain wall scattering and current induced magnetic switching in patterned ferromagnetic nanowires". These results have helped to elucidate the problem of the sign of the resistance contribution of domain walls. This work was published in Physical Review Letters and has received numerous citations. Between 2005 and 2006, Serban worked as a research assistant in the Physics Department at The University of York, in a joint theoretical and experimental study of the ultrafast optically induced demagnetization and magnetization recovery processes in patterned ferromagnetic films.

Between 2007 and 2012 Serban worked as a postdoctoral researcher within the Condensed Matter Group at Leeds University and has been involved in a number of large collaborative networks and projects, including Spin@RT and ESF – SPINCURRENT. This work was published in prestigious journals including Physical Review Letters and Physical Review B with numerous citations received. Serban was co-author on a £1.6m EPSRC grant, awagitrded in October 2010 jointly to Leeds University and Glasgow University to significantly expand the research into current-operated spintronics. This is a significant and ambitious research programme, focusing on novel magnetic multilayer devices, which is expected to have important contributions to current understanding of magnetism at the nanoscale and its interaction with spin-polarized currents and electrical fields, as well as establishing materials systems and geometries for a new generation of spintronics devices. Between 2012 and 2014 Serban worked as a Higher Research Scientist at the National Physical Laboratory in the Functional Materials Group. Serban was involved in several large research projects involving several universities, research organizations and industrial partners worldwide. These projects included the FP7 V-SMMART, EMRP Nanostrain, Nanomotion ITN, Nanoferroelectrics II IRD and VAMAS PFM. A collaborative work with Liverpool University has helped to establish, characterize and model a novel oxide heterostructure multiferroic material, (YFeO3)5(LaFeO3)5, results published in Chemical Science.