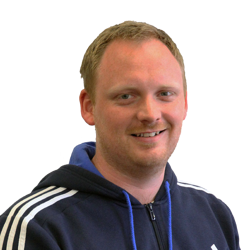 Lecturer in Human Physiology
School of Sport and Health Sciences
0

Robert's background is in human and exercise physiology with experience ranging from applied physiological support to large scale laboratory investigations. Robert is trained in many Exercise and Molecular Physiological techniques allowing him to investigate multiple levels of assessment; from athletic performance to metabolic and molecular controlling mechanisms. In recognition of his contribution to teaching he is a Fellow of the Higher Education Academy. Robert is also heavily interested in several research areas including Recovery from exercise, Thermoregulation and the influence of external temperatures on muscle and bone adaptations.

After graduating in 2009 from Liverpool John Moores University with a 1st class BSc. (hons.) in Sports Science Robert immediately completed his MSc. Sports Physiology at the same place. After gaining considerable applied and laboratory skills during his Masters year he was successful in applying for the role of Physiology Technician at LJMU, where he remained for almost 3 years. During those 3 years, Robert searched for funding to complete a full-time PhD at LJMU, which he was successful in doing so towards the end of 2013. His PhD focused on the mechanisms responsible for a cold-induced augmentation of the gene PGC-1alpha; the “master regulator” of mitochondrial biogenesis. This interest came from the theory that ice-baths, often used for recovery after exercise, may promote skeletal muscle adaptation. Since arriving at UCLan Robert has published several investigative and opinion pieces based around this work, been invited to present at international conferences and guest edited journal special editions on this topic.