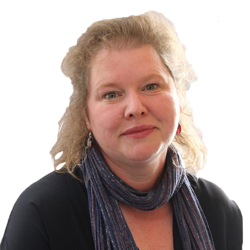 Pauline is course leader for BA Language and Linguistics. She teaches a range of subjects in language and linguistics across a number of programmes, with an especial interest in grammar/syntax, and particular expertise in descriptive and theorical historical Germanic linguistics.

Pauline has been Course Leader for the BA Language and Linguistics programme since 2013. She teaches in the areas of grammar and syntax (levels 4 and 5), historical linguistics (level 5), world grammars (level 6), and educational linguistics (level 6), with a special educational interest in grammar for writing and approaches to teaching grammar. Pauline’s primary research interests are in the areas of (a) morphosyntactic change and grammaticalization, (b) descriptive and theoretical accounts of ancient Germanic (Old Norse, Anglo-Saxon) and (c) Norse influence on Anglo-Saxon. In terms of postgraduate supervision, she has been Director of Studies for projects in the areas of historical linguistics, grammar for writing and dialect intelligibility, and Second Supervisor for a project on English prepositions.

Pauline has been teaching at the University of Central Lancashire since 2005. She became a full-time lecturer in 2010 and a senior lecturer in 2015. Since joining the team, Pauline has developed her academic advisor role, with a particular focus on recognising barriers to success and providing scaffolding for students from non-academic backgrounds. She was delighted to be awarded the “we ‘heart’ you” award from the Students’ Union in 2019, having been nominated by current students in recognition of her supportive role. Having returned to education as a mature student and being a first- generation university graduate, Pauline is committed to the idea that education can transform lives.

Pauline’s primary research focus is in the fields of language change and theories of change. She is particularly interested in grammaticalization, morpho-syntactic change and change at the pragmatics/syntax interface. The descriptive focus can be synchronic (focused on a particular historical period) or diachronic (across time periods), and the linguistic object of study is ancient Germanic: Old Norse, Old and Middle English. Her interest also extends to Norse influence on Anglo-Saxon, and evidence of influence from the historical and modern northern dialects of English. Her PhD thesis is a synchronic and diachronic study of aspects of the noun phrase in Old Norse and Older and Modern Faroese. She has worked on the history of subject contact clauses in English, diachronic accounts of definite marking in Insular Scandinavian, reflexives in Old Norse, the syntax-discourse interface in Old Norse, and the Norse origin of various words and constructions in English.