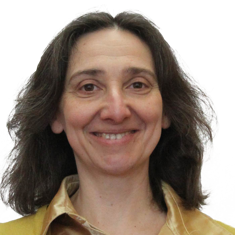 Reader in Russian, The Director of The Vladimir Vysotsky Centre for Russian Studies // Subject Leader for Russian // Lead for ‘Representations of Migration, Diaspora and Exile in Media, Literature and Art’ (MIDEX Centre, UCLan)
School of Humanities, Language & Global Studies

Olga teaches across a wide range of subjects in Russian Studies, and is the founding Director of The Vladimir Vysotsky Centre for Russian Studies which runs an extensive programme of academic and cultural activities. Olga’s main area of expertise is Russian literature and cultural history from the 19th century to the present. She is a prolific researcher, collaborating in numerous international projects, and an award winning poet, with two books of poetry (in Russian).

Olga has published widely in the field of Russian Studies, including Literature, Philosophy and Film Studies, as well as Identity and Gender Studies. She edited and co-edited collective volumes on Russian Irrationalism, the Russian Jewish Diaspora, and Russian literature and philosophy. Her latest monograph with Bloomsbury Academic, published both as hardcover (2015) and paperback (2016) editions, is dedicated to Russian irrationalism in a historical perspective. Olga has organised and co-organised numerous international conferences, including that on Russian cultural continuity, in 2016, and on Russian-British Intercultural Dialogue in the framework of the Russian-British Year of Music 2019. Her activities as the Director of the Vladimir Vysotsky Centre for Russian Studies involved hosting a large number of distinguished visitors, including Belorussian nuns from the St Elisabeth convent near Minsk, who gave a Russian Orthodox painting workshop in 2018. You can see a brief TV coverage of the event here. Being an expert on Russia Abroad, Olga is also the Lead for the ‘Representations of Migration, Diaspora and Exile in Media, Literature and Art’ research strand within the UCLan Research Centre for Migration, Diaspora and Exile (MIDEX).

Olga has two doctorates from the University of Bath – in Franco-Russian Studies (2007) and in Mathematics (1995). Prior to joining UCLan in September 2014 to set up Russian as a degree subject, she held a Leverhulme Early Career Fellowship in the Russian Department of the University of Bristol, working on the theme of Russian Irrationalism, and a research assistantship at the University of Trier. She also lectured on Russian Cultural Studies at the University of Bath, and organised a research network for the study of Russian Jewish Cultural Continuity in the Diaspora, as part of a research project sponsored by the Leverhulme Trust, UK. During her doctoral study, Olga was a holder of the highly competitive Entente Cordiale Scholarship to the Sorbonne, France. She has been a member of scientific committees for many international conferences worldwide, and is frequently commissioned to write book chapters and peer-reviews by various internationally renowned publishing houses. Olga is an Editorial Board’s member for several international academic journals across Europe. She has written more than 70 academic articles, book chapters and reviews. Among her book length studies there is a fully annotated, scholarly edition of unique archival materials on the life of the Russian Diaspora in Europe in the inter-war period. She is currently involved in an international, interdisciplinary collaborative study of WWI from a comparative Russian-British perspective. All this research is disseminated not only to the global academic world, but also to the general public, through the activities of the Vladimir Vysotsky Centre for Russian Studies at UCLan. Olga’s latest monograph Russian Irrationalism from Pushkin to Brodsky. Seven Essays in Literature and Thought was received to high critical acclaim. In particular, it was noted that ‘it views the rational/irrational antithesis not so much through the lens of categories taken from the Enlightenment or from nineteenth-century philosophy, but from a contemporary and, in many ways, more complex and multifaceted perspective’ (The Russian Review), and that Olga ‘is supremely at home in the modern Russian literary tradition and writes about it with a fluent confidence. She is consistently thought-provoking and engaging’ (Modern Language Review).Olga is looking to supervise enthusiastic post-graduate students on the themes of Russian literary and cultural history.

Olga‘s interests and knowledge encompass both classical and contemporary Russian culture with the main focus on cultural and literary history and history of ideas. Her principal area of expertise is Russian literature and Russian cultural history from the 19th century to the present day. Other areas of interest include comparative literature, Soviet and Post-Soviet film, gender and identity studies, and cultural continuity. Having started her research with the creative legacy of the Russian Jewish irrationalist and existentialist thinker Lev Shestov (1866-1938), who died while in Parisian exile from Bolshevik Russia, Olga then moved on to a broader study of Russian Jewish cultural continuity in the Diaspora in the inter-war period. This later led her to an even broader topic of Russian Irrationalism in literature and beyond, of the last two centuries. With a sustained research focus on the continuities and breaks in Russian cultural and literary history, Olga is interested, in particular, in the Silver Age reception of classical Russian literature, and applications of socio-cultural and philosophical approaches to literary studies. She welcomes proposals for doctoral research on Russian cultural and literary history, especially pertaining to the interplay between Russian literature, philosophy and sociology in a global context.