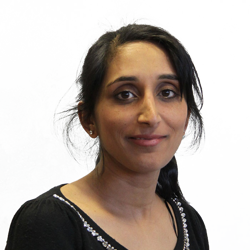 Munira is a Senior Lecturer at the School of Law and Social Science.

Munira has taught in the areas of Contract Law, Tort Law, Legal Skills, Street Law, and Lawyer’s Role in Mediation. Munira is involved in the supervision of both, undergraduate and postgraduate dissertations. Alongside her teaching responsibilities, Munira is the School’s disability lead and Exams Officer. She is also a member of the University’s Ethics Review Panel as well as the University’s Review Panel. Munira is a Fellow of the Higher Education Academy. Munira was awarded her PhD from the University of Manchester. Her thesis focused on environmental law with specific reference to water law. Her PhD was titled, ‘Judicial Interpretations of the General Water Pollution Offences: An Internal Coherence Perspective’. Munira welcomes post-graduate students across her areas of interest.

Munira joined the School of Law and Social Science in 2003 as a Lecturer in Law. She has taught on the LLB, GDL, and LLM.