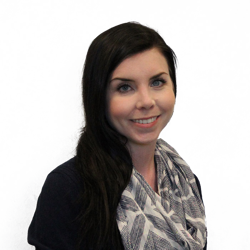 Lindsay is a Research Fellow at the University of Central Lancashire, where she completed her PhD in 2017. She is research active in equine and human biomechanics, with a special interest in using surface electromyography to investigate how equine muscles facilitate movement. She is a 2021 Morris Animal Foundation Fellowship recipient and is working to evaluate the impact of equine lameness on movement and muscle activity with colleagues at Utrecht University and Delsys/Altec Inc. Lindsay is involved in several other national and international equine research collaborations, as well as supervising postgraduate student research.

Lindsay's research on equine biomechanics and the use of surface electromyography (sEMG) within this field have been published widely in Equine Veterinary Journal, American Journal of Veterinary Research, Comparative Exercise Physiology and Journal of Electromyography and Kinesiology. In 2021, Lindsay was the recipient of a Morris Animal Foundation Fellowship, and is collaborating with colleagues at Utrecht University and Delsys/Altec Inc. to evaluate the impact of equine lameness on movement and muscle activity, using three-dimensional kinematic and sEMG technologies. Her current research also involves the development of standardised equine sEMG signal processing methods. Lindsay has been involved in research for the Fédération Equestre Internationale (FEI), the International governing body for equestrian sport, and is currently involved a collaborative project to develop an evidence-based Classification system for the sport of Para Equestrian Dressage, which is funded by the FEI.

After completing her undergraduate degree at the University of Guelph, Lindsay moved from Canada to the UK to pursue her MSc in Equine Science at the University of the West of England. This is where Lindsay developed her interest in using surface electromyography (sEMG) and motion capture technologies to investigate how equine muscles facilitate movement. Her initial MSc work in this area was published. From here, Lindsay went on to pursue a PhD at the University of Central Lancashire, which she completed in April 2017. As an Associate Fellow for the Higher Education Academy (HEA), Lindsay has previously taught part-time on human biomechanics modules at UCLan and on an Equine Management HND course. Lindsay currently works as a Research Fellow at UCLan, where she is working on various equine and human biomechanics projects under the supervision of Dr. Sarah Jane Hobbs. Her current research involves collaborative work with colleagues at Delsys/Altec Inc. and Utrecht University to develop standardised equine sEMG signal processing methods and to evaluate the impact of equine lameness on movement and muscle activity patterns in horses, which is funded by a Morris Animal Foundation Fellowship Training Grant. She is also currently involved a collaborative project to develop an evidence-based Classification system for the sport of Para Equestrian Dressage, which is funded by the FEI. As part of the Research and Consultancy in Equine Surfaces (RACES) team, Lindsay has also worked alongside researchers from UCLan, Myerscough College and Nottingham Trent University on various research and consultancy projects. Lindsay is an accredited Animal Scientist (Associate) (R.Anim.Sci) through the Royal Society of Biology and British Society of Animal Science Register of Accredited Animal Scientists and Animal Technologists. She has presented her research at various conferences, including the International Conference on Equine and Canine Locomotion (ICEL), British Equine Veterinary Association (BEVA) Congress, International Conference on Equine Exercise Physiology (ICEEP) and British Society of Animal Science (BSAS) Conference. She acts as a reviewer for several scientific journals and has also contributed her knowledge and expertise to newspaper articles (The Times), a book chapter and an online video course for the FEI Campus, the FEI’s e-learning platform.