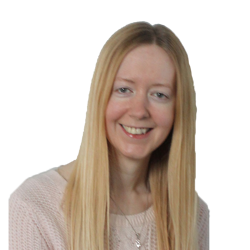 Karen is a Lecturer in Physics in the Jeremiah Horrocks Institute. Karen is a surface scientist investigating the physics of surfaces and interfaces and specialising in the field of ionic liquid surface science. She is interested in CO2 capture materials and photovoltaic devices. Karen enjoys organising outreach activities for school children and the general public.

Karen joined The University of Central Lancashire in 2015 as a Lecturer in Physics. She leads several modules across the undergraduate Physics and Astrophysics degree programme and supervises final year project students. Karen is Year 1 tutor for Physics. In this role she monitors student engagement, is a first point of contact for student's academic and personal issues and supervises the Frontier Education residential course. Karen is a Fellow of the Higher Education Academy (HEA). Karen’s research is in the field of surface science and she supervises PhD students in this area. She carries out most of her research at synchrotron facilities around Europe. Karen has a passion for outreach activities and organises physics demonstrations at the Lancashire Science Festival as well as “flash-bang” shows and talks at local schools and colleges.

Karen was awarded a PhD in Physics by The University of Manchester in 2010. The title of her thesis was "Molecular Adsorption on TiO2 surfaces: Modelling Potential Biomedical and Photovoltaic Devices". This involved experimental work and computational modelling to understand fundamental interactions at surfaces relevant to these devices. Following her PhD, Karen won an EPSRC funded “PhD Plus" one-year scholarship which she carried out at Manchester. In 2011 Karen moved to the School of Chemistry at The University of Nottingham where she was employed as a Postdoctoral Research Fellow. Here she investigated ionic liquid surfaces and their interaction with gas molecules with a view towards carbon capture applications. In 2015 Karen joined the University of Central Lancashire as a Lecturer in Physics and started her own research group in the field of surface science. Karen is interested in the physics of surfaces and interfaces, for example, structure, bonding and charge dynamics. Karen is vice-chair of the Institute of Physics (IOP) Thin Films and Surfaces Group committee. Karen has given invited talks at university seminar series across the UK as well as public lectures for the Institute of Physics and the Pint of Science Festival. She organises the Physics Show Floor stand at the annual Lancashire Science Festival and in 2016 she led a team of undergraduate students on an international outreach event to the Cyprus Science Festival. In 2016 she chaired the first international Summer School on nanoScience@Surfaces at the University of Cambridge. She co-chaired the first Surface Science Day meeting held at the University of Central Lancashire in 2015 and was on the organising committee for the 2nd, 3rd and 4th Surface Science Day meetings held at The University of Liverpool in 2017, University of Birmingham in 2018 and The University of Manchester in 2019.

Karen is a surface scientist and is particularly interested in the behaviour of ionic liquids at surfaces. Ionic liquids are salts, composed solely of anions and cations, but they tend to be liquid at room temperature because of their large, asymmetric ions which do not pack easily into crystals. The unique properties of ionic liquids show great promise for transforming industrial processes such as gas capture and separation, catalysis, corrosion protection, lubrication, batteries and photovoltaics. Optimising ionic liquids for use in these very different technologies relies on understanding chemical, structural, mechanical and charge transfer processes at interfaces. Many of the experiments Karen carries out are at European synchrotron facilities, including Diamond Light Source (UK), MAX IV (Sweden), ASTRID2 (Denmark), ESRF (France) and BESSY II (Germany). Most experiments are carried out under ultra-high vacuum using X-ray Photoelectron Spectroscopy and X-ray absorption techniques. She also uses near-ambient pressure facilities that can accommodate these techniques in the millibar pressure regime, which then allows the study of liquids and gases. The fundamental understanding of surfaces and interfaces that are gained through these experiments is vital to improving industrial processes and devices.