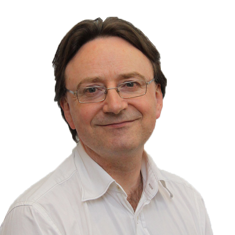 Julian researches human relations and social innovation from a psychosocial perspective. His work supports the work of the Centre for SME & Enterprise Development through connecting the university’s civic mission and the work of the Preston Model and community wealth building, in Preston and beyond. His research has developed social dreaming and the visual matrix as research methods. He is recognised as a world leading expert in social dreaming and his work on the Preston Model.

Julian is a research fellow in the Centre for Citizenship and Community, School of Social Work, Care and Community. He brings together the practical and impactful aspects of the university's commitment to SME development with research into co-operative values and principles based around action research on the Preston Model, a version of community wealth building that has taken on a specific life of its own in Preston. At UCLan, he is a member of the Institute of Citizenship, Society and Change. Externally, he is a Director of the Centre for Social Dreaming and on the Executive Committee of the Climate Psychology Alliance. He is visiting research fellow at the University of the West of England and external examiner at Essex University.

Julian Manley's overall interests are in multi-disciplinary and trans-disciplinary approaches in psychosocial studies and in encouraging a more ‘holistic’, inter-subjective approach to thinking and understanding that embraces thought and feeling, intellectual and experiential, theory and practice. He has many years of experience in the field of psychosocial studies, and a background in group relations in the Tavistock tradition. He has published widely in the field of Social Dreaming, having recently published two books on the subject, including the monograph Social Dreaming, Associative Thinking and Intensities of Affect (Palgrave Macmillan 2018). The book is the first extended academic account of social dreaming and makes the case for considering social dreaming within a Deleuzian paradigm. As part of his work around Social Dreaming, Julian has helped to develop the Visual Matrix method and published several articles that demonstrate the use of visual images and free association in groups in ways that are similar to social dreaming. Julian’s research explores human relations, and the psychodynamics of relations in groups and society at many levels, very often with a focus on complexity and groups and social situations that are hard to engage with. His work encompasses social issues that defy simple explanations such as race issues, and attitudes towards climate change. He has most recently been profoundly involved with the meaning of relationships, community and citizenship in a co-operative society. He is the former Chair and founding Director of the Preston Co-operative Development Network that promotes the development of co-operative principles and values, which forms part of an on-going action research project into the validity and possibilities of learning from co-operative structures in a post-Brexit or even a post-growth society. He is recognised as one of the instigators of the Preston Model and is currently responsible for nurturing relationships and work partnerships between the University and the City Council in Preston as part of the continuing socio-economic development work and community wealth building project in Preston. He has been invited to speak at numerous public events and conferences on the Preston Model and the question of co-operatives, locally, nationally and internationally. His research and contribution to the field has been highlighted in national and international press and media, ranging from Europe to North America and Japan.

Julian’s active areas of research include co-operative values and principles at work and in community. He also contributes to studies in climate change psychology. Much of his research concerns the use and theory of social dreaming and associated psycho-social research methods, such as the Visual Matrix.