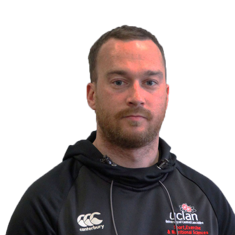 Lecturer in Sport and Exercise Sciences, Course Leader for BSc Strength and Conditioning
School of Sport and Health Sciences

Ian teaches across a range of subjects for our Sport, Nutrition and Clinical Sciences team. He teaches and supervises projects on undergraduate and postgraduate courses.

Ian is the Course Leader for the BSc (Hons) Strength and Conditioning degree. This is a role which allows him to work with students throughout their journey with us.

Alongside his lecturing position Ian is an Academy S&C coach at Wigan Warriors. Over 9 seasons at the club he has had various coaching positions in the youth system. He has previously worked with Wigan Athletic FC and Paralympics GB in S&C/sports science positions. Ian was the S&C coach for the GoalBall squads during the London 2012 Paralympic Games. Ian's research is really applied, often integrated with his coaching role. His PhD was exactly that, titled 'Strategies to optimise sled towing and acceleration in semi-elite rugby league players'.