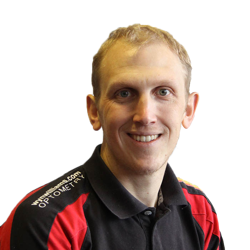 Graham is a senior lecturer and course leader for the Bachelor and Masters Motorsport Engineering programmes at the University of Central Lancashire. Having completed his PhD in marine engine lubrication in 2019 he continues to be involved in research projects with the Jost Institute of Tribotechnology.

Graham is an engineering lecturer and researcher at the University of Central Lancashire. As course leader for the Motorsport Engineering programmes he teaches in a variety of subject areas relating to the mechanical design of systems found in motorsport applications. This involves the teaching of analytical, computational and experimental methods used in the design process, namely the mechanics, fluid dynamics and thermodynamics involved in vehicle dynamics, powertrain systems and other subsystems and components relating to the suspension, powertrain and cooling systems. Graham is also an academic supervisor for the IMechE Formula Student group project in which students must see through a design project from market to race event, including the design and build of a Formula Student race car. Graham completed his PhD in 2019 in which he investigated the effect of spray lubrication on piston-ring lubrication in an internal combustion engine. This project is motivated by the challenges involved in optimising piston-ring lubrication in large two-stroke marine diesel engines, where the desire is to use as little oil as possible to adequately lubricate the piston-rings while correctly neutralising acidic by-products of the combustion process. The project involved development of a test engine, before conducting experiments to evaluate the time dependency of piston-ring oil-film thickness and film extent over the stroke, and its relationship with axial and radial lubricant transport. Results were compared with predictions from a computational lubrication model that Graham also developed using Reynolds equation and the conservation of mass. Graham continues to be involved in research with the Jost Institute, both continuing the work from his postgraduate studies and with other engine lubrication projects.

Graham started work at UCLan in 2008 and became course leader for the Motorsport Engineering courses in 2014. Prior to starting at UCLan in 2008, Graham had been an engineering designer at an automotive parts and tools manufacturer in Chorley. He graduated with honours from Imperial College in 2003 with a Master’s degree in Aeronautical Engineering.