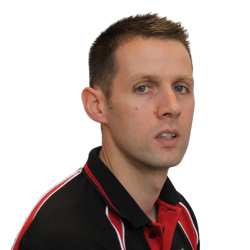 Craig is responsible for the academic management and development of the MSc Sports Coaching. His teaching and practitioner focus is in applied sports coaching and coaching science. This includes performance analysis, performance assessment, applied coaching practice and physical preparation for sport. Within the School Craig has led on the use of coaching observational analysis, match and notational analysis and has established and supervised a number of student placements and internships with professional sports organisations. Craig has developed a performance analysis pathway that reflects the real world use of industry standard technologies and techniques to help prepare students for their next step into industry.

Within the School, Craig is responsible for leading the provisions for performance analysis and consultancy analysis via the medium of match and technique analysis. This requires him to liaise on the provision of technical and tactical game analysis for a number of clubs from a range of sports and a range of industry standard software providers. Some of our well-established partner clubs include Preston North End FC, Preston North End Ladies FC, Fleetwood Town FC, Wigan Warriors, Blackburn Football Academy, Preston Grasshoppers RFC, Ireland International Rugby League Squad, and Oceania Olympic Committee, Fylde Rugby Club, and UCLan sports teams. As part of the build-up for the Olympic Games in London 2012, Craig was performance director for the team of athletes (from Oceania) based at UCLan as part of an official LOCOG pre-Olympic training camp. Craig is currently head coach for the University basketball teams and a competitive basketball player.

Before working at UCLan he worked in the education sector, previously employed by Lincoln University and Runshaw College, teaching on their degree and foundation degree programmes. Prior to this, Craig worked with regional basketball teams and local basketball development projects throughout Lincolnshire and was involved in a number of sports science support projects led by Lincoln University. Before graduating, he also gained experience working in the leisure industry as a centre supervisor, gym instructor and personal trainer.