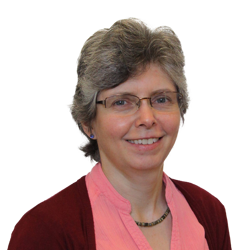 Anne Sansom is a Reader in Astrophysics at the University of Central Lancashire. Since 1992 she has taught at UCLan on astronomy, mathematics and IT courses, both on-campus and distance learning, and is also an active researcher within the Jeremiah Horrocks Institute. Previously, she worked in the X-ray astronomy group at Leicester University, on X-ray satellite missions, calibration and data analysis.

Anne is research active within the area of astrophysics and is a member of the Extragalactic Astrophysics Research Group.

Anne Sansom graduated with a DPhil in Observational Astronomy from the University of Sussex in 1987. From 1987 to 1992 she worked as a research associate in the X-ray astronomy group at the University of Leicester, taking part in calibration of the ROSAT telescope XUV detector and using data from several X-ray missions as well as optical data to understand compact interacting binary stars, including one orbiting in only 11 minutes; hot sub-dwarf stars, whose X-ray emission depends on the structure and chemistry of their outer atmospheres, and X-ray emission from elliptical galaxies that show different behaviours as a function of galaxy age as measured from their stars. In 1992 Anne started work at UCLan as a lecturer, taking astronomy lecture and laboratory based courses at all undergraduate levels. She later became a Senior Lecturer and contributed to maths and astronomy undergraduate project supervision and postgraduate research student supervision. Anne was awarded a Readership in October 2017 and has five postgraduate completions as Director of Studies. Anne works extensively on the astronomy distance learning programme, developing new modules, revising modules and tutoring students through a variety of modules. She also manages the distribution and marking of distance learning portfolio of modules. From 2000-2009 Anne was the UK representative on the Science Working Group for the Southern African Large Telescope (SALT) . The SALT telescope is now operational and UCLan has a share in using it for astronomical research and student training. She is regularly asked to review papers, grants, telescope time applications within the international astronomical community and has sat on panels for telescope time awarding and STFC fellowship allocations. She has been an external examiner for several PhD students, covering her areas of expertise centred around multi-waveband projects on galaxy structure and evolution. Anne is currently on the telescope time panel for the international ALMA mm/submm array. Anne gives research seminars at Universities and conferences and gives talks to amateur groups.

The main research areas that Anne is currently involved with include international collaborations for observations of galaxies and stars. She was a member of the Herschel space telescope, Astrophysical Terahertz Large Area Survey (H-ATLAS) consortium studying the dust content of galaxies of different types and in different environments. She is also a member of the Galaxy and Mass Assembly (GAMA) consortium, which provides multi-waveband data and galaxy information for projects such as the study of dust in elliptical galaxies that Anne and her PhD student are currently leading. Much of Anne’s research involves using stars to understand the light from galaxies that is from the integrated stellar population. She works with collaborators to develop techniques that accurately measure the ages and chemical abundance patterns in various types of galaxies dominated by optical light from stars. This includes development of galactic chemical evolution (GCE) software to model the time evolution of galaxies through star formation, feedback into the interstellar medium (ISM) and links to the observable spectral properties of galaxies. She has shown that the average ages and chemistry of different types of galaxies varies, with low mass elliptical galaxies and the bulges of spiral galaxies being younger than more massive systems. These results are based on observations that Anne and collaborators obtain on various optical telescopes (including WHT, Gemini, NTT). The GCE code has been used to show the importance of understanding binary star contributions to the chemistry, particularly the uncertain nature of binary supernovae of type Ia and their impact on GCE in galaxies. Recent developments include a new collaboration to expand the empirical data available for understanding element abundance ratios in stars. This is in collaboration with colleagues in Brazil and Spain and is based on expanding the MILES stellar library, which is used as an international standard for state-of-the-art stellar population modelling. Anne is involved with the observations and interpretation of results for stars with different chemical abundance patterns.