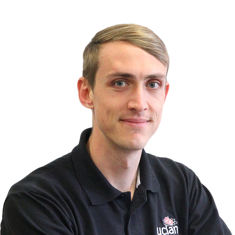 Craig undertook a year’s internship at Blackburn Rovers Academy in 2010 whilst completing his Sports Coaching undergraduate degree here at the University. He then worked as Lead Academy Analyst at Blackburn Rovers for two seasons before being promoted to work with the club’s First Team and Under 21 team for two seasons prior to starting work at the University alongside his Master's degree. His expertise focuses on the use of performance analysis to support the coaching process and ultimately aid player development. He has considerable experience using performance analysis software and technology, which he utilises in order to develop students’ use of performance feedback for the development of their athletes. He also provides guidance to students using technology to reflect upon and ultimately enhance their coaching. Craig has helped to develop and maintain the university’s links with a number of professional clubs such as Preston North End Football Club, Wigan Warriors, Burnley Football Club, Blackburn Rovers, Preston Grasshoppers, Blackpool Football Club and Preston Hockey Club. Since 2015 Craig has developed expertise in the scouting and recruitment of players in professional football having held senior scouting roles at both Brentford Football Club and Blackburn Rovers alongside his work at the university. He is currently active within the field, working as Head of Technical Scouting at Preston North End as well as working as Goalkeeping Coach at Preston North End Women's Junior Football Club. He is also a Tutor for the Professional Football Scouts Association delivering on their Level Two and Level Three programmes.