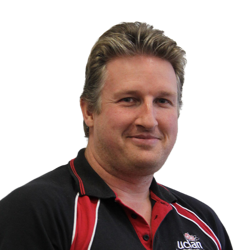 Head of School
School of Sport and Health Sciences
0

Bryan is the Head of School and is responsible for the smooth running of all operations within it. Bryan's background is in performance sport, having worked as a sport psychologist, strength and conditioning coach and performance coach in this domain. Bryan has also delivered performance support in large businesses and now provides training to coaches who operate in a performance domain in both sport and business.

Bryan manages the largest School in the University with over 130 staff. His main duties include the management of people, resources and the budget and making a significant contribution to University strategy.

Bryan has 30 years of experience working in high performance sporting environments. Originally, Bryan trained as a sport psychologist and worked with a variety of sports ranging from Olympians to talented youngsters as part of a talent pathway. This included being a member of the British Olympic Association Psychology Advisory Group. Bryan also worked as a strength and conditioning coach in professional Rugby League, and as a strength and power consultant to several National Governing Bodies for Sport.

Throughout his career Bryan has coached to a high level in several sports including weightlifting, rugby league, volleyball and hockey. More recently, Bryan has focussed on performance and coach development in sport and business. Bryan was the course leader for the first UK Coaching Certificate level 4 programme in the UK that accepted candidates from across sports. This included National and domestic coaches working at the highest levels in their sport. During the build up to London 2012 Olympic Games, Bryan managed the pre-Olympic training camps for the Pacific Islands and contributed to the development of their coaching and performance workforce development for several years after the Games. Bryan has over 20 research publications in sport psychology, performance analysis and skill development and has a long history of knowledge exchange in sport, military and business.