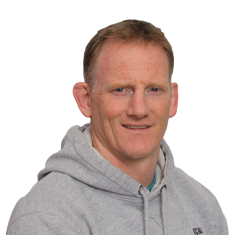 Andy is mainly responsible for the Sports/Football Coaching and Development provision at UCLan's Burnley Campus but also contributes to the Sports Coaching and Performance course at the Preston Campus. He specialises in the teaching of high performance related modules having spent 20 years playing and coaching rugby league at a professional level. He is also Assistant Coach of the Serbian National Rugby League team and is a prominent Coach Educator for the Rugby Football League.

Andy's current role is to develop the portfolio of coaching and development related programmes delivered at UCLan's Burnley campus. Specifically he is developing the Football Coaching and Development programme to provide students with the skills, experiences and networks that will establish them at the forefront of football coaching and development practice. The programme is rooted in applied practice by linking theory to practice and provides many opportunities for students to apply their skills in real world contexts across a range of opportunities both in the UK and abroad. Andy is also heavily involved in the delivery of high performance modules at Preston, where students have the opportunity to experience a high performance training camp at Club La Santa in Lanzarote and visit a variety of high performance environments such as the British Cycling Centre in Manchester and the FA's St George's Park in Burton. Through his role as a Coach Educator for the Rugby Football League, his research interest has been to look at the effectiveness of Coach Education Programmes delivered by the National Governing Body in order to help them establish World leading programmes to educate the new generation of coaches within rugby league.

Andy began teaching in 1993 at Barnsley College where he was involved in the development of the new BTEC Nationals in Sport. During his time at Barnsley he became a member of Edexcel's quality assurance team ensuring the BTEC programmes were run consistently in FE colleges and schools across the country. In 2005 he moved to the University of Huddersfield where he developed a Foundation Degree and subsequent top up programme in Sports Coaching, finally moving to work at UCLan in September 2009 where he now leads the BA (Hons) Sport/Football Coaching and Development programmes at the Burnley campus. Throughout his teaching career Andy has been a professional rugby league player and subsequently a coach with a variety of teams in the Championship and Super League competitions. Playing and working in these high performance environments has enabled him to apply academic theory to real life experiences for the students, take on the leadership of related modules and develop their content to meet the changing needs of the sport performance industry. Andy is a UKCC level 4 coach having been successful in completing the inaugural course developed by UCLan. He is also a Coach Educator for the Rugby Football League ensuring the development of quality rugby league coaches for the future. Finally a role that he is really enjoying is that of Assistant Coach to the Serbian National Rugby League team.