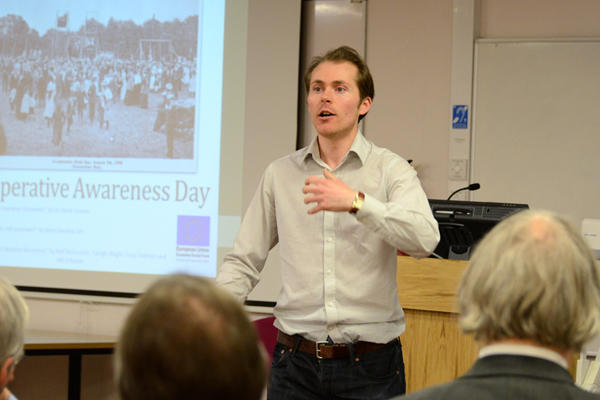 The UK Co-operative College, based in Manchester, is the educational arm of the British co-operative movement and home of the National Co-operative Archive. The College works with co-operatives throughout the world, promoting understanding of co-operative heritage, values and business structures.

In 2009 Stewart and Meredith successfully bid with the College for an AHRC Collaborative Doctoral Award studentship to explore the historic alliance between the Co-operative Party and the Labour Party. The successful applicant for the PhD studentship, Angela Whitecross has contributed towards the development of new permanent galleries on co-operative politics at the Rochdale Pioneers Museum and devised learning resources for use by the Co-operative Heritage Trust. Stewart also co-organised international, multidisciplinary conferences with the College in 2009 and 2012. The edited collection arising from the 2009 conference, The Hidden Alternative was published by United Nations University Press in 2012 to mark the United Nations International Year of Co-operatives. Vernon’s research on co-operative education was a prominent feature of these conferences and the above publication. In particular, his research has provided a historical reference point for the Co-operative College as it develops the movement’s rapidly expanding Co-operative Schools Network. Frank’s interest in colonial development has generated a dynamic international dimension to the partnership. Since 2011 Frank has forged a link with Moshi University College of Co-operative and Business Studies, Tanzania, through the appointment of one of its lecturers, Somo Seimu to a UCLan International PhD Scholarship exploring co-operative development in East Africa during the trans-colonial period. Furthermore, Frank, Stewart and Gaynor Wood of Futures have overseen undergraduate community history projects on the co-operative movement in Preston, which culminated in a student-led Co-operative Awareness Day in 2013, embedding co-operation in the teaching and research culture of the History team. UCLan students are currently engaged in oral testimony collection for the Co-operative College’s National Co-operative Oral History Project which aims to create an oral archive to be housed at the National Co-operative Archive.

By focusing on the international development strategies and politics and educational provision of a unique organisation that represents both social movement and business interests, these research projects are providing insights into under-researched features of twentieth-century social, political and business history. This ranges from tensions between co-operatives and the state, to African co-operatives’ dependency on British banks, and the relationships between co-operation and the working class.