John McDonnell MP, Labour’s Shadow Chancellor, joined actor and director Michael Sheen at the University of Central Lancashire (UCLan) on a visit to highlight the innovative work of Preston City Council and its partners.

Since 2011, Lancashire council's funding has almost been halved but in response Preston City Council has devised what has become known as the ‘Preston Model’, which is implementing a programme to make Preston and the surrounding areas in Lancashire more self-sufficient.

Under the model, Preston City Council became the first northern city to implement the Living Wage and the council and other large placed based institutions have joined together to redirect contracts towards local businesses and helped them to reorganise their supply chains so that goods and services are bought locally wherever possible.

UCLan is a key local partner in the initiative and is working with Preston City Council to drive it forward, along with many others who were some of the first to get involved including Lancashire County Council, Cardinal Newman, Preston's College, Lancashire Constabulary and Community Gateway.

The ‘Preston Model’ has also created the conditions in which new cooperative organisations including Link Psychology Cooperative, Guild Money and The Birley, a social enterprise shared studio and exhibition space for local artists set up for four UCLan graduates, emerged.  They are promoting worker owned cooperatives if local businesses don’t exist to bid for public contracts and when business owners are selling their enterprises when retiring.

The model was inspired by cooperatively run communities in Cleveland, Ohio.  After a tour of the city, Michael Sheen joined John McDonnell to meet with all the institutions involved in creating community wealth at UCLan.

Michael Sheen OBE, said: “I first read about what was happening in Preston through recent media coverage and it got me really interested to find out more. I was excited to hear the journey they've been on and to explore what other communities, like my hometown of Port Talbot, might be able to learn about drawing on that approach.

“This week I've been announced as the new Patron of Social Enterprise UK, so it feels right to be in Preston looking at how institutions can help grow a truly social, local economy and support empowering the people of our communities. The way the Preston model uses the Social Value Act is inspiring and should provide encouragement to towns across the UK that this is possible.

“I'm really pleased to see high level political interest in these ideas with John McDonnell also visiting on the same day and I hope all political parties invest time in understanding where cooperatives, social enterprises and the wider social economy can provide real solutions to the wide array of challenges facing our communities.”

John McDonnell MP, Shadow Chancellor, said: “I’m very pleased to be in Preston again as I think the council here has provided a model of how an innovative Labour council can act creatively to build a richer local community.”

Provost at UCLan Dr Ebrahim Adia welcomed the guests, including the leader of Preston City Council Peter Rankin and Lancashire Police and Crime Commissioner Clive Grunshaw, to the University.  In his opening remarks he confirmed that the University was very excited to be involved as an anchor institution in the Preston community wealth building initiative.

He said: “Given that UCLan is re-doubling its efforts to support the economic, social and cultural development of Preston and the wider Lancashire region it is natural for the University to be involved in this ground-breaking initiative. Co-operative values and principles align with the institution’s values of compassion, teamwork and equality.”

"I first read about what was happening in Preston through recent media coverage and it got me really interested to find out more."

Dr Julian Manley, UCLan Research Fellow from the Psychosocial Research Unit (PRU), commented: “We are delighted to welcome both Michael Sheen and John McDonnell to the University.  UCLan is working with Preston City Council to promote worker-owned co-operatives in the City and in 2016 we published a detailed report on expanding Preston’s co-operative economy that revealed a strong co-operative culture in Preston, despite only having a relatively small number of established co-operative businesses.

“We’re now looking to develop a formal co-op network that is loosely based on the Mondragon Corporation in Spain, which works with local government to promote co-operative and local economic development.

“This ethos is becoming part of the UCLan culture and the University has since taken an active part in reconsidering its procurement practice so that more purchasing can occur locally, thereby contributing as an ‘Anchor Institution’, one of the major stable drivers of the local economy to the local economy.”

Cllr Matthew Brown, Cabinet Member for Social Justice, Inclusion and Policy on Preston City Council, said: "We are privileged Michael Sheen and John McDonnell with their commitment to social campaigning and economic justice have taken time out of their busy schedules to learn how we are building community wealth in Preston and Lancashire.

“Community Wealth Building is a collaborative approach involving many place based institutions including Lancashire County Council who themselves pay the real living wage and are also committed to spending more on goods and services to benefit local people and businesses.  Additional ideas around community banking, energy democracy and expanding the cooperative economy show community wealth building could be transformative both here and elsewhere in the country."

View images from the meeting on the UCLan Flickr gallery. 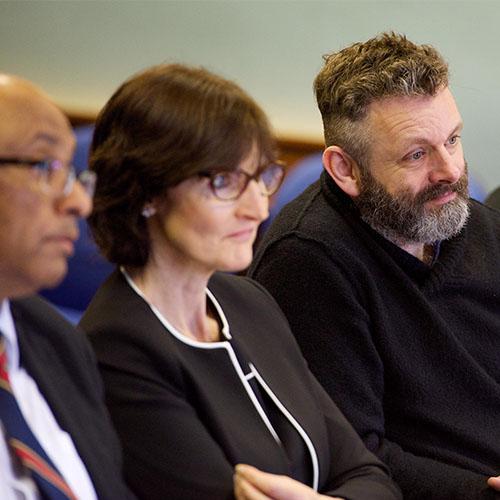 An exciting visit to the city