Tom Harforth residency in the Leighton artists’ studios in Canada

UCLan BA (Hons) Fine Art graduate, Tom Harforth, recently undertook an independent residency in the Leighton artists’ studios at the Banff Centre in Canada, which he discovered through his research during one of his course modules at UCLan.

“I wanted to explore my practice within a rural subject matter and to transfer my practice technique from an urban to an organic subject matter,” Tom explained. The Rocky Mountains provided this with an array of textures and forms to inspire and provoke new artwork.”

The module, titled ‘The Creative Practitioner’ is a compulsory aspect of the final year on the Fine Art BA (Hons) degree and is implemented to prepare students for their next steps after graduation.

Fine Art lecturer, Victoria Lucas, said: “Through this module, students gain an understanding of the syntheses between their individual practice as artists and the opportunities available to them in the creative industries, preparing them for self-employment, self-promotion, networking and the high level of professionalism and motivation that is vital in this competitive industry.”

Since graduating in 2016, Tom has established himself as a creative practitioner, specialising in printmaking, and says the facilities available at UCLan has had a huge influence on his career so far.

He said: “The reason for choosing Fine Art at UCLan was predominantly down to facilities and in particular the printmaking workshops, but also the opportunity of my own studio space from the start was a bonus.  This gave me the space, time and equipment to build and explore my practice in the expanded field of printmaking.” 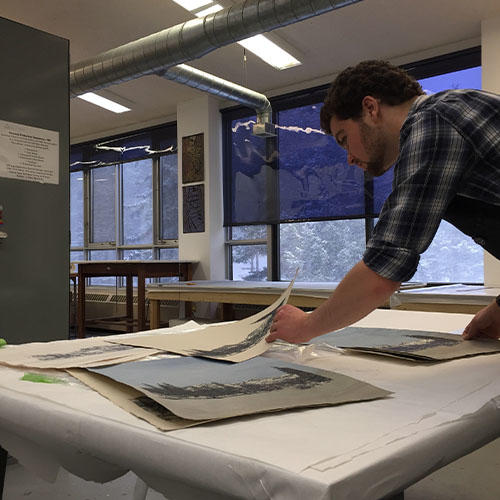 Tom has exhibited and sold many of his works through open and invited exhibitions, including Cumbrian Artist of the Year and Great Print exhibition, which he considers his greatest achievement to date. He said: “My commission by the Brewery Arts Centre, where I created a series of prints echoing the history of the arts centres buildings: these were shown in a solo show throughout the building itself.”

Tom is now currently producing new work, developing a series of hybrid collage prints from the resources he collected during residency in Banff and plans to expand into commercial products to widen his online presence and sales.

“I will remember my time at UCLan as being the catalyst of my artistic career, where I could really see how to conduct and peruse as an artist,” Tom said, reflecting on his time at the University.

“This was through meeting artists, working in great spaces and with facilities that allowed me to achieve my goal of setting up as a self-employed artist/printmaker. I would recommend the course and UCLan to anyone wanting to undertake a degree, as during my time it opened up some fantastic opportunities.”