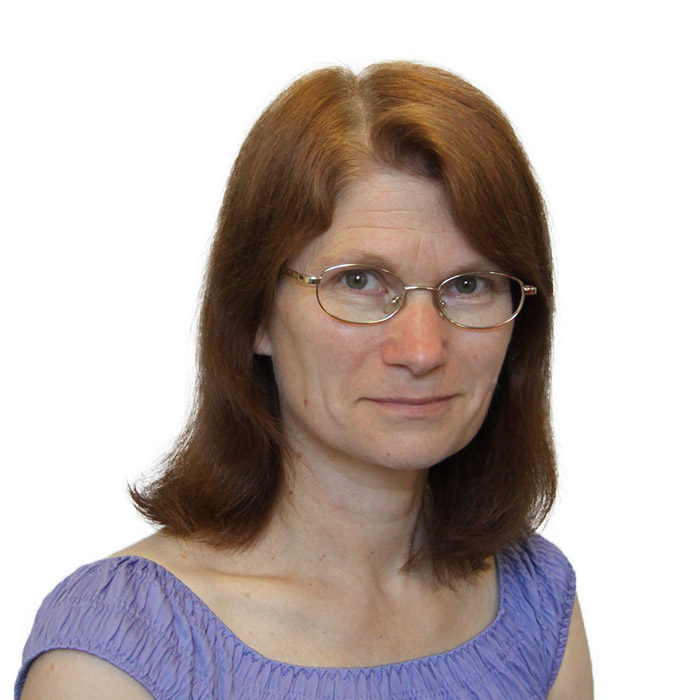 Barbara divides her time between teaching on the on-campus Physics/ Astrophysics programme and the successful Astronomy Distance Learning programme which she also oversees as Course Leader. With a background in multi-wavelength observational astronomy, her research interests are in the area of stellar astrophysics. Barbara also supervises undergraduate projects and dissertations, recently using observations from the university’s Moses Holden Telescope at Alston.

Within the on campus Physics/Astrophysics programme, Barbara has taught a range of physics and astrophysics courses over the years, including first year mechanics and thermal physics, second year physics and astronomy labs and third year astrophysics courses. Currently she teaches second year Thermal and Quantum Physics. In the distance learning programme she has led the development of many of the modules and grown the programme from a couple of single module Certificate courses to a unique distance learning BSc with innovative modules such as Collaborative Investigation, a group study carried out online by the students. Most of her distance learning teaching in recent years is at third year level. As course leader she also handles the admissions for the distance learning programme and provides academic advice and pastoral support to the students throughout their studies. Her combination of experience with oncampus teaching and distance learning expertise has led to invitations from other universities to be external advisor.

After completing her PhD entitled ‘Observations of Interacting Binaries’, Barbara took up a post in 1983 as Resident Astronomer at the European Space Agency’s tracking station near Madrid. Here Barbara supported astronomers from institutions all over Europe to use the satellite the International Ultraviolet Explorer (IUE) in making their observations in diverse fields including solar system objects, variable stars, normal and active galaxies. She also continued her interest in the accretion discs of dwarf novae, a type of interacting binary star (the topic of her PhD). This involved coordinating multiwavelength observations (ground-based optical and infrared, and satellite ultraviolet and X-rays) with teams of collaborators across Europe. This experience continues to feed into teaching such as in the distance learning module Collaborative Investigation.

Returning to the UK in 1986, Barbara worked as a post doctoral researcher in the High Energy Astrophysics group in Oxford. Here she pursued her research on interacting binaries, expanding her interest to magnetic cataclysmic variables and X-ray binaries. In 1988 Barbara took up a Support Astronomer role with the Royal Greenwich Observatory. Based in Cambridge, she was responsible for supporting the optical identification programme for the far ultraviolet Wide Field Camera on the ROSAT X-ray satellite, a joint German, US and UK project. She compiled the observing packs (including digital finding charts, before the days when online sky surveys were available) and visited the La Palma Observatory on many occasions as Support Astronomer for the optical identification programme, using the 4.2-m William Herschel Telescope as well as the Isaac Newton Telescope. This expertise has been invaluable in developing astronomy laboratory modules at UCLan and supervising undergraduate projects using archive data from professional telescopes.

Barbara was a member of Royal Astronomical Society (RAS) Council from 1988-1991, during which time she organised a scientific meeting for young astronomers and served on the RAS Committee for the Status of Women in British Astronomy and Geophysics, the first of its kind in the UK. She has also served on the European IUE Allocation Committee and ROSAT Time Allocation Committee, has been referee (peer review): for submissions to Monthly Notices of the Royal Astronomical Society, Panel for the Allocation of Telescope time, ROSAT. She was a member of the ROSAT Science Working Group and member of the XMM Post Launch Review committee. She has published over 50 refereed journal articles. Prior to arriving at UCLan, Barbara had experience of small group teaching (tutorials/supervisions) at both Oxford and Cambridge. She had delivered short Astronomy courses as professional development to groups of IBM employees, general interest weekend astronomy courses to adult learners (Madingley Hall, Cambridge) and a series of evening classes in Oxfordshire. This lay the foundations of her continuing commitment to adult education in the form of UCLan’s distance learning courses.